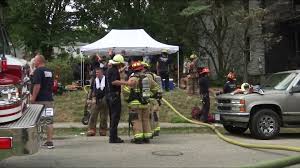 ROANOKE, Va. – The old Fallon Park Elementary School will meet the wrecking ball soon, but not before Roanoke firefighters received their own kind of education in the vacant building.

Roanoke Fire-EMS spent the past two weeks using the old school as a training ground. Firefighters cut through the roof, broke through doors and cut holes in the walls as they would during a full-fledged fire.

Roanoke Fire-EMS Capt. Rhett Fleitz said it has been a year since the department was able to practice in a vacant building. Fleitz said these are the types of drills that are impossible to emulate in their own environment.

“We have continually tried to come up with new ways of getting training to our firefighters that are exciting and not something they can do every day,” Fleitz said. “This seems to have fulfilled that.”

The old Fallon Park Elementary School has been vacant since students moved to its replacement next door in December. Demolition on the old building could begin as soon as Friday.

Roanoke-grown music label making beats for the world, and you’ll never guess where from