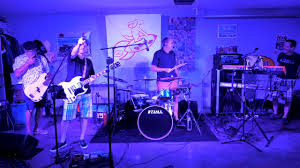 ROANOKE, Va – The Star City is once again producing more stars on the worldwide stage. Although the people you’re about to meet are behind the scenes, you may be familiar with some of their work. It’s the story of a group of Roanoke kids with a dream, doing what they can to turn it into reality.

You may have heard their music, and you definitely know the brands they’ve worked for. But you probably don’t know that it all comes from a family basement off Cove Road.

“If Snoop were to ever call us up and say, ‘Hey I want to make songs,’ we’d be like, ‘Alright you’ve got to come to my mom’s basement,’” Kirk Dudley said.

It’s Kirk Dudley’s family basement, the one he and his brother grew up in. The basement still has an old-style bar and shag carpeting to prove it’s that old. Dudley, Josh Kimbrough and George Trent are all now in their 30s, but they, along with some others, hung out in this basement as kids and grew up making music here too.

“We were also making music that other people wanted to listen to also, that we come to find out that are great for being placed in movies or television ads,” Kirk said.

Their latest music placement is in a trailer for Human Capital, a Universal Pictures movie set for release this spring. About three years ago, after making music since their teens, they started their label PUSH Audio after getting a track in a McDonald’s advertisement.

Since then, they’ve worked in international ads for TRESemmé, and others like UnitedHealthcare, Verizon, Apple, GoPro, Nordstrom, Nine West and Peloton, among others. One of the label’s songs was also used in a popular YouTuber’s viral video about a fake Tesla bike, racking up about 2.5 million views.

Kirk’s brother is the leader of the label and recently moved out to California to help grow the business. They started it after they realized they wanted a bigger piece of the pie.

“Once you get one, people see that type of innovation in your work and another one will follow so that kind of prompted the move out here to L.A.,” Scott said.

But the heart of the operation is still in Roanoke. They record vocal tracks out of a closet that they transformed into a recording booth as kids. The foam on the walls is the original foam they put up, and an old-school two-way intercom system still hangs on the wall. While higher-profile acts are making their products in million-dollar studios, PUSH is making them in a basement while the boys’ mom, Helen Dudley makes them snacks like chicken tenders upstairs.

She’s blood to her two kids but claims them all as children, and she couldn’t be prouder.

“They’re fine young men. They have homes of their own and they still know their way back to home and back to the basement, because that’s where they did their music,” Helen said.

PUSH Audio has accomplished in just three years what others work a lifetime for. Scott said there’s a secret sauce to their success, and it’s remembering where you came from.

“Being from Roanoke, that’s what made us different, and innovation and being different is what shines out here, so home is where the heart is, and that’s what started it,” Scott said.

The group also enjoys calling Roanoke home so that it can feature other local talent as well.

Roanoke drug kingpin convicted on all counts in federal case