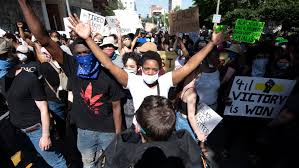 The Roanoke City Council Monday ratified a resolution from the city manager to declare a local state of emergency because of weekend protests and riots. It allows for extra state funding and enforcing a curfew if needed.

City police are investigating how things unfolded over the weekend, and council members spoke about the city needing to change. They say they want to start thinking about the long-term response.

Council members said issues today go back 400 years. Councilman Bill Bestpitch said we need to address this in a much better way, maybe by finding a group that makes sure this gets all the consideration needed

Councilman Patricia White-Boyd sent condolences to the family of

, the Minnesota man who died in police custody, as well as all victims of this kind of violence. She said these are difficult times for all of us. She doesn’t agree with the violence but felt helpless over the weekend, and wants residents to know “we want a police force that understands these biases and if they don’t that they’re trained to do that.”

Councilwoman Michelle Davis said she is proud of people who have taken a stance to form peaceful protests and allow voices to be heard. She said she is concerned about the violence of oppressors and people being oppressed. She hopes we are reaching a point of change in the nation, creating energy for people to express they’ve had enough and won’t put up with it any more.

The council also unanimously passed a resolution to declare a local state of emergency in response to recent flooding, to acquire further funds and assistance.