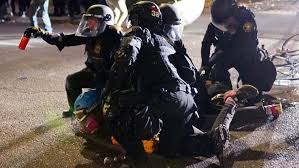 According to the Roanoke Police Department, the trooper was struck by an illegal firework and sustained minor injuries. However, police say the trooper received treatment and is fine now.

WFXR News has reached out to Virginia State Police for more information.