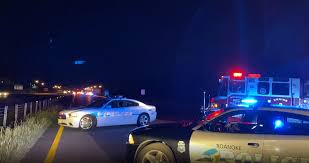 The crash occurred about 10 p.m. on Interstate 581 near Valley View Mall in Roanoke.

Police say the driver of a Mitsubishi Eclipse, 27-year-old Brittany Kay Underwood, was traveling north and lost control, ran off the left side of the road, ran through the median and overturned.

Underwood was not wearing a seatbelt and died at the scene. Police say speed and alcohol are believed to have been factors in the crash.