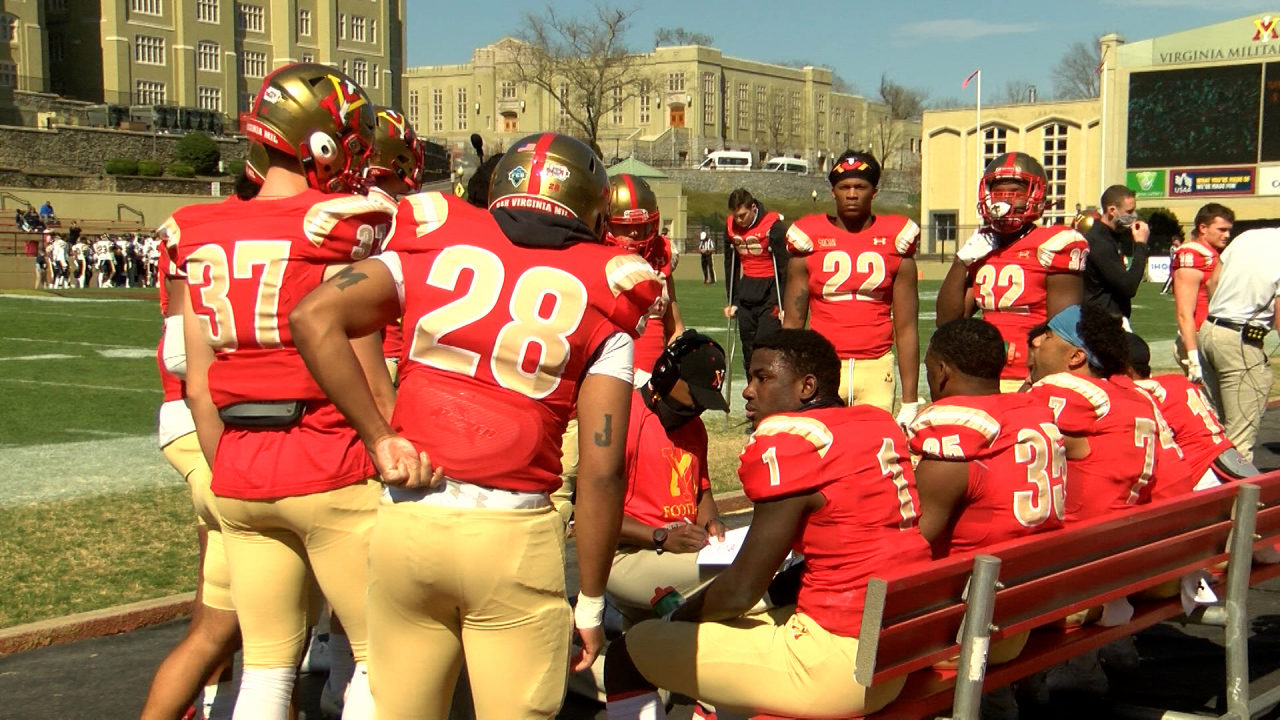 LEXINGTON, Va. – With an outright Southern Conference title still in reach, the VMI football team hosts The Citadel on Saturday at 1:30 p.m. at Foster Stadium. A win will give VMI its first SoCon football championship since 1977 and eighth overall in program history.

The game will be broadcast on WWCW. Saturday’s contest is officially sold out.

KEYDETS CONTINUE QUEST FOR SOCON TITLE – VMI football will have another opportunity to clinch the Southern Conference football title this Saturday as it faces The Citadel at Foster Stadium. The Keydets were denied in their initial bid to lock up the title outright when they fell to ETSU, 24-20, at Foster Stadium on April 3. If the Keydets prevail over the Bulldogs, they would claim their eighth Southern Conference football championship and first since 1977. It would also result in VMI’s first ever FCS playoff bid. VMI can also claim the SoCon title with a Mercer loss at Samford Saturday.

MILITARY CLASSIC OF THE SOUTH SOLD OUT – Tickets for Saturday’s Military Classic of the South are sold out as the last remaining seats were taken on Monday morning. The Commonwealth of Virginia’s Executive Order #72 set the capacity of Foster Stadium to 30% of total occupancy, or 3,000 individuals.

MORGAN TOPS IN COMPLETION PERCENTAGE – VMI redshirt freshman Seth Morgan, who has become VMI’s starting quarterback since a season ending injury to Reece Udinski, currently leads FCS in completion percentage at 77%. Over the last two games which were his first career college starts, Morgan has completed 61 of 80 passes for 690 yards and four touchdowns.

BATTLE FOR THE SHAKO – VMI will look to defend the Silver Shako trophy when it faces The Citadel Saturday in the Military Classic of the South Saturday. The award, a silver replica of the cadet head covering worn at full dress parades at both military colleges, has been presented since 1976. VMI reclaimed the Silver Shako for the first time in 13 meetings in October, 2019 in Charleston, S.C. The last time the Keydets won back-to-back Military Classics was in 1995 and 1996.

VMI AT #12/#15 – VMI enters Saturday’s game with the Citadel with a #12 ranking in the AFCA FCS coaches Top 25 poll and #15 in the Stats Perform FCS Top 25 poll. It marked the fifth straight week that the Keydets have been nationally ranked. Prior to the season, VMI had never been ranked as an FCS member.

VMI RADIO NETWORK: WWZW – 96.7 FM (Lexington, Lynchburg). A free audio broadcast of the game is available at 3wzfm.com and via the Tune-In app. Wade Branner will call the play-by-play and Rick Cruze will be color commentator. Chip Tarkenton will provide on-field reports.

TELEVISION/ VIDEO STREAMING: Saturday’s game can be seen on ESPN+ and as part of the Nexstar Game of the Week TV package which will air in select SoCon markets including the Lexington/Roanoke/Lynchburg area on WWCW. Other affiliates are ECBD/The Lowcountry’s CW (Charleston), WJHL/News Channel 11 (Johnson City), WMYT/MY 12 (Charlotte), WYCW /The CW62 (Greenville, Spartanburg, Asheville). Pete Yanity will call the play-by-play and Jared Singleton will provide analysis.

THE SERIES: Saturday’s meeting between VMI and The Citadel will be the 76th meeting overall in the series that began in 1920. The rivalry adopted the name “The Military Classic of the South” in 1976 when the Keydets and the Bulldogs began vying for the Silver Shako trophy that is awarded to the winner of each meeting. The Citadel leads the overall series 42-31-2. In the last meeting between the teams in 2019 in Charleston, S.C., VMI reclaimed the Silver Shako for the first time since 2002 when the Keydets defeated The Citadel, 34-21. It ended a Citadel 12-game win streak in the rivalry. In games in Lexington, VMI leads 17-13-2.

HERRES NAMED NATIONAL AND SOCON PLAYER OF THE WEEK – Junior wide receiver Jakob Herres was named Stats Perform National and SoCon Offensive Player of the Week for his outstanding play in the March 27th 36-31 win over Wofford in Spartanburg, S.C. Herres caught a career-high 15 passes out of 18 targets for 207 yards and three touchdowns – all career bests – and hauled in the 14-yard game winning catch from quarterback Seth Morgan with :35 remaining in the contest. He also generated 30 yards after catch against the Terriers. It’s the second time this year a Keydet has been named National Player of the Week as outside linebacker Connor Riddle earned the honor for his play against Furman February 27.

VMI SECURES WINNING SEASON – With the 36-31 come-from-behind win over Wofford March 27, VMI started 5-0 for the first time since 1960. The Keydets also secured their first winning season since 1981 ending a span of nearly four decades where the closest the Keydets could come to winning marks were a pair of consecutive 6-6 records in 2002 and 2003. VMI had also won six straight games dating back to the 2019 season finale which is the longest consecutive win streak for the program since 1959-60 when the Keydets reeled off 12 straight wins over two consecutive SoCon championship seasons.

ROAD WARRIORS – VMI finished its 2021 spring football season with a perfect 3-0 road mark in regular season games and went undefeated on the road for the first the first time since 1922 when the “Flying Squadron” under coach Blandy Clarkson went 3-0 in road tests. All three VMI football regular season road victories this year occurred where VMI had never won before and ended winless droughts at Western Carolina (13 games), Samford (three games) and Wofford (seven games).

MORGAN SPECTACULAR IN FIRST START – Taking over for SoCon Preseason Offensive Player of the Year Reece Udinski who is out for the season with injury, redshirt freshman Seth Morgan shined in his first college start by completing 25 of 34 passes for 375 yards and four touchdowns in the 36-31 win over Wofford March 27. Morgan also rushed for 76 yards and finished with 451 yards total offense – the second-best single game in school history. The 375 yards passing ranked 10th best on the VMI all-time charts.

HERRES HEROIC – The 15 receptions by Herres against Wofford March 27 were the second most in a single game in program history behind only Aaron Sanders’ 16 catches at Mercer in 2015. The 207 yards receiving stands as the sixth best mark on the VMI single game charts and he became only one of five players in school history to catch three touchdown passes in a game. Herres now has 19 career touchdown receptions which one behind all-time leader Mark Stock (1984-88).  Herres over the two-game stretch against Samford and Wofford caught a combined 29 passes for 373 yards and five touchdowns. He also moved over the 2,000 mark in career receiving yards and currently 163 receptions good for third all-time at VMI and 2,212 career receiving yards which moved him past Zohn Burden (2002-05) for fourth place on the VMI all-time list.

SWINEHART GETS FIRST CAREER TD RUSH – Freshman running back Grant Swinehart reached the endzone for the first time in his college career with a six-yard run in the first quarter of the March 27 win at Wofford. He added a 3-yard TD run against ETSU April 3.

RICE STARTS NEW FIELD GOAL RUN – Redshirt freshman Jerry Rice had his successful field goal string of six straight conversions end in the first half against Wofford, but later came back to kick a 28-yard field goal in the fourth quarter. He was two for two against ETSU April 3 bringing his season to 9 for 11 on the year. Rice earlier kicked three field goals against Western Carolina March 6 in Cullowhee connecting on attempts of 27, 29, and 32 yards for his first converted field goals of his college career. It marked the first time that a VMI kicker had three field goals in a game since Barrett Way against Charleston Southern on October 21, 2006.