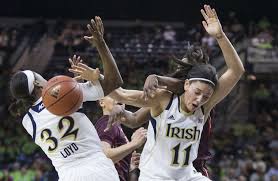 South Bend, IN – The Virginia Tech women’s basketball team secured a 68-62 victory at Purcell Pavilion – the program’s first, behind another stellar performance from freshman Elizabeth Kitley who recorded a double-double with 19 points and 10 rebounds Thursday night. With the win, Virginia Tech moves to 20-6 (10-5) ahead of Sunday’s Senior Day clash with rival Virginia. Kitley, the reigning ACC Freshman of the Week took over the game down the stretch receiving the ball in the post, often into a double team and turning her shoulder to elevate to the rim. She also stepped outside and knocked down several jumpers. Her eight blocks were one shy of tying the school record. Taja Cole, the ACC’s leader in assists had 11 in the game, part of a complete game -eight points, 11 assists, four rebounds and five steals. Tech built a 22-point lead early in the fourth, before Notre Dame found their touch beyond the arc with Sam Brunelle who knocked down six triples in the game. She led the Irish with a game-high 20 points, but Notre Dame couldn’t get closer than five points late in the game, as they fell to 10-17 (5-10).

Dara Mabrey was the other Hokie in double figures with 11 in the game and Trinity Baptiste added nine off of the bench.
Related Topics:
Up Next

Virginia Clinches Series Against Bucknell With a 12-3 Sunday Victory