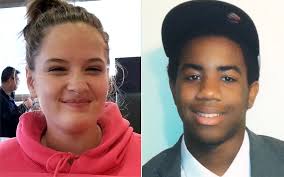 The families of the young couple found fatally shot on a rural highway in Virginia are still hoping for answers as police arrest a suspect in connection with the grisly killings.

Ayanna Munne Maertens Griffin, 19, of Maryland, and Joel Bianda, 21, of Alexandria, were found lying in the grass early Saturday morning on an isolated stretch of Route 58 in Halifax County, Virginia State Police said.

Police rushed to the scene believing they were responding to a car crash, but when they arrived, they discovered both Maertens Griffin and Bianda had been shot.

“We know that she [Ayanna] and Joel didn’t pass due to the car crashing. We are all still waiting for answers and pray that we get justice for Ayanna and Joel,” Maertens Griffin’s aunt, Kassie Rich, told InsideEdition.com.

Virginia State Police announced on Thursday an 18-year-old suspect’s has been charged with two counts of first-degree murder, although they did not release teen’s name.

The couple had reportedly been driving to pick up a friend in Danville, Virginia, before they were killed.

“State police personnel have been working around the clock pursuing multiple leads related to this homicide investigation,” Capt. David O. Cooper II, Commander of the Virginia State Police Bureau of Criminal Investigation’s Appomattox Field Office, said in a press release. “We cannot thank the public enough for providing the tips and information necessary to aid our special agents with effecting an arrest so quickly.”

Both families have created GoFundMe pages to help with funeral costs for the pair.

“Joel’s dream was to make it big with his music and to be able to make enough money to take care and move others,” the Bianda family wrote on GoFundMe, noting he had just turned 21 less than a month ago. “He loved us with all of his heart.”

Rich said Ayanna was always walking around with a smile on her face.

“She would light up any room she walked into. As my sister has always said, ‘she was the light in the dark,'” she told InsideEdition.com. “Ayanna had this energy that you just wanted to be around. Anyone she met instantly click with her.”

Police said the case is still under investigation and urge anyone with information to contact  Virginia State Police at 434-352-7128.