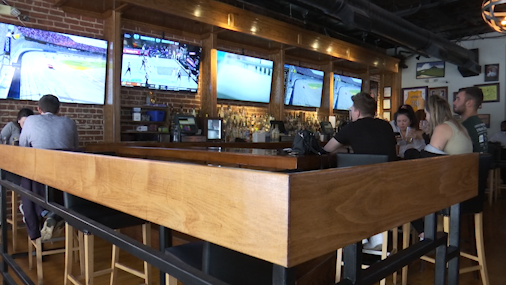 ROANOKE, Va. — Bar seating is back in Virginia for the first time since March 2020, marking a new step in the fight towards normalcy.

“We’re glad to see things start to come back to a little bit of normal,” said Neal Keesee, co-owner of 202 Social House.

While the change was announced on Wednesday, April 21, many people waited until the weekend to celebrate.

Bartenders at 202 Social House say they were kept busy.

“It was hard work. I was sweating a lot. There were a lot of people with sore feet and backs at the end of it, but I think they did a pretty good job,” said Andrew Schwartz.

For Bethany Spencer, after a long day a work, the bar is often a place she seeks to unwind.

“It’s relaxing for me to be able to come in and sit at the bar, and be surrounded by people that I don’t know for once,” Spencer said.

“The bar seating is important in a restaurant because a lot of business travelers, and a lot of independent people don’t really want to sit at a table. They like to come sit at a bar, and it truly makes the bar atmosphere great.”

According to Northam, more eased restrictions are on the horizon in Virginia.

Virginia will ease restrictions on gatherings, venues, restaurants on May 15

Starting May 15, restaurants will be able to start selling alcohol after midnight again. Dining rooms will also be able to stay open later.

“People just want to see the businesses, kind of, come back to normal, look normal, and feel normal,” said Keesee.

This is a chance to see customers and help businesses stay afloat.

“It’ll definitely help with the businesses around here, being able to extend their hours and get, kind of, back to normal, because a lot of them have been suffering,” Spencer said, “so it would be great to be able to start to thrive again.”

Until then, there are still some restrictions for dining establishments, including: