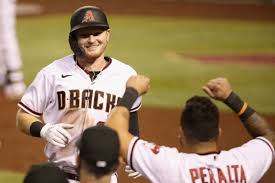 CHARLOTTESVILLE, Va. – Former Cavalier Pavin Smith (2015-17) will make his Major League debut on Saturday night (Sept. 12) for the Arizona Diamondbacks. The seventh overall pick in the 2017 MLB draft will play right field and bat ninth against the Seattle Mariners. First pitch in Phoenix is set for 8:10 p.m. EST.

Smith will be the third Cavalier (Joe McCarthy – Giants & Brandon Waddell – Pirates) to make his MLB debut in 2020.

Smith will be the 47th Cavalier to appear in a Major League Baseball game and the 24th under head coach Brian O’Connor. Smith is the sixth Cavalier (Adam Haseley, Joe McCarthy, Josh Sborz, Matt Thaiss & Brandon Waddell) from the 2015 National Championship team to make it to the show. In the past two seasons, eight Virginia baseball players have made their MLB debuts, including five in 2019, tied for the most of any college baseball program.

In three seasons, Smith won a national championship, earned first team All-America honors, first team All-ACC accolades and was a semifinalist for the Golden Spikes Award. He stamped his name in the UVA record books, blasting 28 career home runs (6th most in program history), including four in the NCAA Tournament, a school record. Smith set the program single season RBI mark in 2017 with 77 and totaled 178 RBI in three seasons, the third most of any Cavalier. He ranks eighth in program laurels with 373 career total bases.

As a first year in 2015, Smith was a unanimous Freshman All-American after starting all 68 games at three defensive positions. He etched his name in UVA lore by hitting the game-tying two-run home run in fourth inning and two-out, go-ahead single in fifth in Game 3 of CWS Finals vs. Vanderbilt (6/24).

Virginia Wins 38-20 Over Duke in Season-Opener