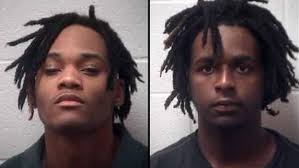 BASSETT, Va.  – One person has been arrested, in Texas, and two people are being sought for the murder of a man in Bassett June 5.

Douglas Gillespie, 25, of Bassett, is in custody. The Henry County Sheriff’s Office is looking for Daniel Fish, 37, and Ashleigh McCallister, 23, both of Martinsville. All face charges of second-degree murder and use of a firearm in commission of a felony.

Martinsville/Henry County 9-1-1 Center got a call the night of June 5 about someone being shot at 7 Grace Drive in Bassett.

Deputies found Robert Williams, 39, shot to death in a doorway.

Gillespie is in jail in Texas awaiting extradition to Virginia. A photo of him was released when he was still on the loose.

Anyone with information about this killing is asked to contact the Henry County Sheriff’s Office at 276-638-8751 or Crimestoppers at 63-CRIME (632-7463). The Crimestoppers Program offers rewards up to $2500 for information related to crime.