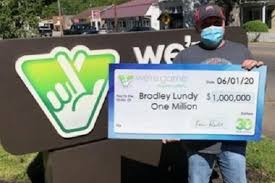 Brad Lundy scratched a $31,000,000 Payout ticket he bought at Kangaroo Express on Stuart Drive in Galax.

VA Lottery said he had the choice of taking the full $1 million prize over 30 years or a one-time cash option of $675,982 before taxes. He chose the cash option. The store receives a $10,000 bonus from the Virginia Lottery for selling the winning ticket.

Lundy told Lottery officials he hopes to buy a house with his winnings.