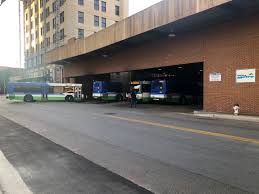 Roanoke, Virginia – The Greater Roanoke Transit Company (GRTC)/Valley Metro and the City of Roanoke have decided not to appeal the recent decision of the Board of Zoning Appeals’ (BZA) decision to reject relocating the old bus depot.

That decision stems from the BZA voting 2-5 earlier this month in not moving forward with approving the plan to relocate the old bus depot to the current Brandon Parking Lot near the Virginia Transportation Museum.

“Though disappointed in the decision of the BZA, GRTC and City Council do not feel appeal of the decision to be the appropriate course of action,” said Anita James Price, President of the GRTC Board and Member of Council. “Both GRTC and the City Council remain committed to the delivery of a modern and convenient central transit station for the thousands of riders that depend upon Valley Metro service to get to jobs, medical appointments, shopping and school.

Both groups have been studying the need for a modern and convenient central transit station to replace the Campbell Court station.

Roanoke City Council has directed staff to initiate actions to ensure the continued location of the Campbell Court station in Downtown Roanoke which will include initiating amendments of the City’s Zoning Ordinance to permit a transit station facility in downtown.

The effort will include appropriate design and development standards for such facilities, public notice on the proposed amendments, and public hearings to be heard before the Planning Commission and City Council.

City Manager Bob Cowell says these amendments will allow the City and GRTC to evaluate all potential sites, including the Brandon Lot, or the new central transit station facility.

City Council continues to remain committed to the redevelopment of the current Transit Station facility on Campbell Avenue, into a vibrant office, residential call center along with the development of an indoor waiting area for Amtrak passengers adjacent to the existing waiting platform.

Cowell also announced that Roanoke City Council plans to take action at their meeting on Sept. 8 on the extension of the development agreements associated with the Campbell Court station’s redevelopment.