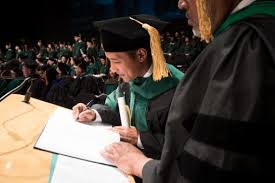 You might call Ben Walker’s ties to Roanoke a winning hand – a straight of five consecutive cards of the same suit. Born in Roanoke, he graduated from a local high school, a local college, and, most recently, the Virginia Tech Carilion School of Medicine. Plus, he will begin his residency at Carilion Clinic this summer.

Walker grew up on a rural homestead at the base of Bent Mountain in Roanoke County. The son of Carey and Teresa Walker, he excelled in sports and academics and graduated from Cave Spring High School in 2012. He attended Roanoke College on a full academic scholarship where he majored in biology and took his first dive into scientific research, studying the hormonal pathways in the zebrafish and how they affect the species’ development.

“Even though I really liked the research, it was missing the human aspect,” Walker said. “I really wanted human interactions, dealing with people’s problems, consulting with people, helping them through their tough times. To me, this affirmed that medicine was definitely the route I wanted to take.”

“Attending medical school here has been great,” he said. “I expected to come to medical school and sort of be thrown out there to the wolves, sink or swim. But the total opposite has been true. The school’s small class size makes you feel like you’re more cared about, and everyone is really invested in each student, helping everybody succeed.”

While at the medical school, Walker has put his love of sports to good use as a member of the school’s annual Docs for Morgan charity basketball game. He also volunteered at a community after-school program for disadvantaged youth. For his research project, a requirement for each student, he was mentored by Mark Hamill, Carilion trauma surgeon and associate professor of surgery at the school, and studied the effects of a certain class of drugs on fall risks in geriatric patients. Walker has been a co-author on six academic journal articles and was awarded a Letter of Distinction for Research Productivity.

Walker (far left) participates in the annual Docs for Morgan basketball game that raises money for the Morgan Dana Harrington Memorial Scholarship at the medical school.

What’s it like attending college and medical school in your hometown?

“It was a great mix of actually being close to home but also having that independence and feeling like you were on your own and doing your own thing,” Walker said.

He fondly recounts how his mother would make food and drop it off at his apartment. Home-cooked meals were a rare luxury for his fellow students.

“Literally all my family lives in Roanoke,” Walker said. “So, it’s nice to still be able to go to family reunions, family functions, birthdays, holidays, and celebrations and keep those relationships strong.”

Walker won’t have to go far to start the next chapter of his life. In July, he will start his residency in internal medicine at Carilion Clinic, something he set his sights on during his third-year rotations in medical school.

“Rotating through the hospital here and seeing how much they really had to offer from the faculty, to the residents, to all the resources, I knew that Carilion would offer me everything that any other hospital would.”

Life after residency may seem like a long way off, but Walker has already decided he would like to start his career as a doctor here in Roanoke. He’s not alone, as several alumni of the medical school are making plans to return to the area. In fact, one of the goals of the school when it was formed was to help relieve the critical physician shortage in Southwest Virginia by training physicians who would eventually choose to return to the area.

“My roots are deep here,” Walker said. “I would definitely love to be able to practice here and stay in the area.”

While we wait for a coronavirus vaccine, eating well, exercising and managing stress can boost your immune system