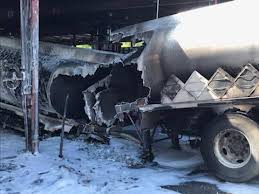 ROANOKE, Va.  — An afternoon hazmat fire in southeast Roanoke on Friday resulted in hundreds of thousands of dollars in damages to the tanker truck and the facility, according to fire officials’ Monday announcement.

According to Roanoke Fire-EMS, the initial call for a possible structure fire at the 1100 block of Industry Avenue SE came in just after 3 p.m. on Friday, May 15. At the time of the incident, WFXR News confirmed that crews were loading hazardous materials from the facility to a commercial vehicle. The Chemsolv tanker truck was carrying several flammable liquids, but fire officials believe the liquid being transferred at the time of the fire was hexane.

Despite the 27 units from Roanoke City and Roanoke County who responded to the fire, the department says there were no reports of injuries. Limited apparatus from the fire stayed at the scene until late Friday night while the hazardous materials were transferred from the burned truck to another vehicle, according to authorities.

Roanoke Fire-EMS says the truck sustained damages in the fire, but the metal non-combustible canopy that housed the transfer operations also sustained smoke and heat damages while an outer building sustained minor damages. As of Monday, May 18, fire officials estimate the damages from the fire — the cause of which is still under investigation — at $277,000.