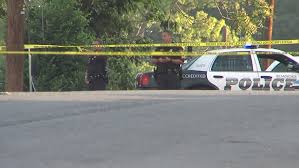 Police said Thursday that no arrests have been made regarding this case.

A homicide investigation is underway in Roanoke after a man was killed on Tuesday night.

Police responded to the 800 block of Shenandoah Ave NW just after 10:30 p.m. on Tuesday for a report of “suspicious circumstances,” according to the Roanoke City Police Department.

Officers found a man who was hurt and being treated by members of Roanoke Fire-EMS. The man was taken to Carilion Roanoke Memorial Hospital where he died shortly after, according to police.

The cause of death is unknown. No arrests have been made in connection. Police did not release any other details surrounding the man’s death, including his identity.

The Dorcus Home is located at 801 Shenandoah Ave NW. It serves as drug-free, transitional housing as part of a re-entry residential program for former offenders. It’s not clear if this homicide happened inside the Dorcus Home or just nearby on Shenandoah Ave.

Anyone with information about this incident is asked to call 540-344-8500 or text 274637, beginning the text with “RoanokePD” to ensure it’s properly sent. Both calls and texts can be anonymous.

One dead, two injured in rollover in Roanoke County