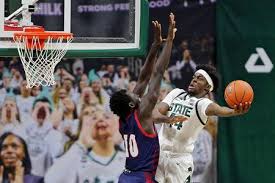 A House bill that was shelved this week would have made Virginia the second state to allow its college athletes to make money off of their names, images and likenesses.

Del. Marcus Simon, D-Fairfax, introduced House Bill 300, that would have allowed student-athletes to earn money through endorsement contracts and obtain representation from an agent or attorney. The bill also said that the aforementioned actions can’t result in the loss of eligibility or scholarships.

This comes after California passed a similar law — the Fair Pay to Play Act — which the NCAA initially opposed, citing that the potential to make money would give California schools an unfair advantage in recruiting.

The NCAA, the governing body for intercollegiate athletics in the U.S., has historically upheld that college athletes are amateurs and “students first, athletes second,” thus ensuring an education remains the sole reason for attending a college or university. The NCAA’s current rules prohibit players from earning money from sponsorship deals. However, the organization recently voted to direct schools to consider rule changes regarding student-athlete endorsements.

“The NCAA often like to take credit for rule changes when they do come about,” Nevius said, “but they don’t do anything voluntarily and this is another example of that.”

New York, Florida and Illinois are among the states which have introduced bills that allow student-athletes to profit off their likenesses. The New York bill adds other provisions which would benefit students. Schools would need to share 15% of their revenue from athletics with their student-athletes and set up a fund for players who suffer serious injuries.

Nevius believes the benefits for players who get hurt are more important than sharing revenues and that other states should follow suit.

“Right now NCAA athletes are not sufficiently protected when it comes to their health and safety rights,” Nevius said. “Taking care of the health and safety of our college athletes should be the priority for any lawmaker or any new rules that come about.”

Helen Drew, sports law professor at the University at Buffalo, said as more states draft bills with their own conditions as to how college athletes can benefit from their talents, it will lead to a logistical nightmare for the NCAA.

“If the NCAA is smart, they’re going to lobby for federal legislation that sets a standard across the country, gets rid of all this potential litigation and addresses the issue,” Drew said. “The problem is they’ve been dragging their feet.”

This is not the first time the legitimacy of the NCAA’s amateurism rules have come into question. UCLA basketball star Ed O’Bannon sued the NCAA in 2014 after he saw himself in a college basketball video game, and it was ruled that the NCAA violated antitrust laws by providing the likenesses of players without compensation.

That same year, Minnesota Timberwolves guard Shabazz Napier — a UConn Husky at the time — told reporters that he sometimes went to bed hungry because he wasn’t given enough to eat and couldn’t afford more. The NCAA would eventually relax their rules for how much food schools were allowed to give their athletes, which included allowing programs to provide cream cheese and peanut butter for bagels and unlimited snacks.

According to Nevius, one of the overlooked provisions in the Virginia bill is crucial — the ability for student-athletes to obtain professional and legal representation — not only for monetary purposes, but also to defend themselves against the schools they attend.

“Representation is critical, not just with respect to landing endorsement deals, but also with respect to enforcing any of the provisions under this rule that schools may take liberties with,” Nevius said. “College athletes have no voice and no independent representation outside of the universities, and it results in a lot of overreach by coaches.”

If it becomes common for college athletes to be allowed to make money while in school, Mario Sequeira Quesada, a senior at Virginia Commonwealth University and goalkeeper for their soccer team, believes that schools should take measures to make athletes more equipped to handle that money.

“In the end, what you want to do in college is become a more complete person,” Sequeira Quesada said. “A better athlete, but at the same time more prepared for the real world.”

The House Subcommittee on Higher Education voted to table the bill Tuesday, meaning it won’t be heard in either chamber this session.