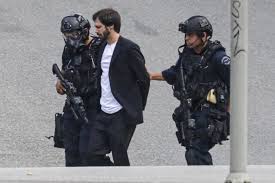 ARoanoke man was arrested Tuesday and charged with malicious bodily injury, abduction and reckless handling of a firearm, according to Roanoke County police and jail records.

The arrest marked the end of a three-hour event during which a Virginia State Police helicopter and Roanoke County SWAT were both rolled out, officials said.

The response started just before 11 a.m. when police were dispatched to the 8500 block of Blacksburg Road for a report of a man assaulting a woman and forcing her into an SUV. A report of the man shooting at the tires of other vehicles while driving was also relayed to officers.
The SUV was found near a residence on the 9200 block of Newport Road where the woman was able to get out, said a county spokeswoman.
The vehicle was seen driving up and down the road and then heading up Brush Road, a mountainous route, as officers approached.

The state police assisted with a helicopter to keep track of the vehicle’s location. Montgomery County authorities also assisted.

Roanoke County SWAT used an armored vehicle to bump the SUV, officials said, and the driver surrendered without further incident around 2 p.m.

Officers arrested Derek Thomas Besase, 32, of Roanoke, according to the police and jail records. He was listed as being held without bond on six felonies and nine misdemeanors.