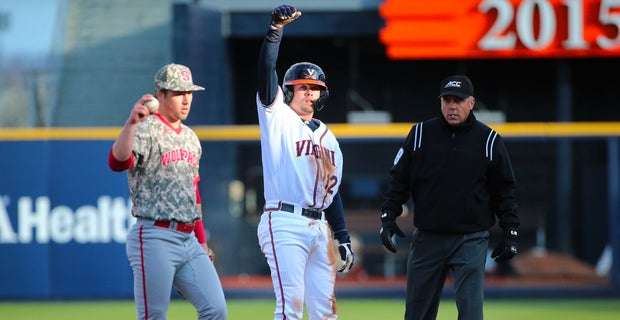 CHARLOTTESVILLE, Va. – Virginia (11-3, 1-0 ACC) opened up Atlantic Coast Conference play on Friday evening (March 6) with a 7-3 win over previously unbeaten and seventh-ranked NC State (12-1) at Disharoon Park. The Cavaliers are now winners of seven-straight games and improve to 10-1 on its current 15-game home stand.

The Cavaliers got another offensive jolt off the bat of Jimmy Sullivan (Wethersfield, Conn.) who hit a two-run homer in the bottom of the second inning to extend the UVA lead to 3-0. The sophomore has homered in back-to-back contests and three times in his last four games. Sullivan went 1-for-3 with two runs scored and two RBI in the win.

The Cavalier pitching staff held NC State to its lowest offensive output of the season. The Wolfpack came into the weekend ranked first in the country in batting average and appeared in the top 10 in the nation in scoring, runs and hits. Virginia pitchers worked of bases loaded jams in the first, second and ninth innings, stranding a total of 17 Wolfpack runners.

Bales was credited with his second win of the week and third of the season after taking over in the fifth. He struck out three batters in 1.2 innings and stranded two runners in his first inning of work by striking out the final two Wolfpack hitters.

Schoch recorded the five-out save and induced the game-ending lineout in the top of the ninth with the bases loaded. The save was his fifth of the season. McGarry and Abbott each struck out five batters and allowed a run.

The Cavaliers had an answer for all three of NC State’s runs, including a two-run rally in the sixth gave them a four-run lead. Zack Gelof (Rehoboth Beach, Del.) capped the inning with a sacrifice fly to right field that score Nic Kent (Charlottesville, Va.). Gelof reached base three times and scored on a wild pitch in the third inning. Kent put together his fifth multi-hit performance with a 2-for-4 day at the plate.

The series continues on Saturday (March 7) with the middle game of a three-game set. Virginia will send righthander Mike Vasil (2-0) to the mound and he will be opposed by Nick Swiney (3-0). First pitch is scheduled for 1 p.m.

Additional Notes
• Virginia has won the first game of the weekend in each of the first four weeks of the season.
• The Cavaliers handed NC State its second loss of the 2019 season after a 23-1 start in the opening game of last year’s series in Raleigh.
• Seven of the nine Virginia hitters were credited with a hit in the contest.
• Marc Lebreux (Montreal, Canada) and Logan Michaels (DeForest, Wis.) both extended their team-best hit streaks to seven games.
• Virginia’s seven-game win streak is the second-longest among ACC teams (Louisville-8).
• The game featured a combined 16 walks and five hit by pitches.
• NC State did not reach double-digit hits for only the third time this season.