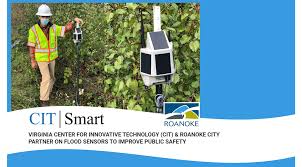 Virginia – As the 35th anniversary of The Flood of 1985 approaches, a unique partnership has emerged to seek flood safety improvements. The Commonwealth of Virginia, through the Center for Innovative Technology (CIT), with support from the Department of Homeland Security (DHS) Science & Technology Directorate, has collaborated with the City of Roanoke in a flood sensor project. CIT has identified Roanoke as an ideal location for flood sensors in Virginia, based on the history of flooding throughout the valley, and the City’s existing flood resiliency efforts. These flood sensors would provide real-time, web-based information on flooding conditions that City staff can use in a variety of ways, such as evacuating flood prone homes, proactively closing roadways, and floodplain management.

“I experienced the Flood of 1985 first-hand, and vividly remember the light of heroism demonstrated during that dark time,” said Chuck Kirby, CIT Vice President of Smart Communities. “It is a privilege for CIT to provide vital smart communities technology, such as ISI Flood Sensors, that can save lives and reduce property damage when flooding occurs.”

“The City of Roanoke will never forget the Flood of 1985,” said Robert S. Cowell, Jr., City Manager. “We learned many lessons from that tragic event in our history. Thanks to emerging flood sensor technology leveraged by dedicated staff, the City of Roanoke is working hard to protect its citizens during local flooding.”

Intellisense Systems, Inc. (ISI) manufactures the Flood Sensors supplied by CIT, on behalf of DHS, to the City of Roanoke. ISI creates advanced sensing and display solutions supporting a data continuum from acquisition to visualization. Its systems are enhanced with software, adding intelligence so raw data can be translated into useful information for improved decision-making and process automation. ISI offers off-the-shelf products and custom development services. ISI has been qualified across engineering, accounting, and manufacturing to serve both government and commercial customers.

Millions of COVID-19 tests being sent to Virginia