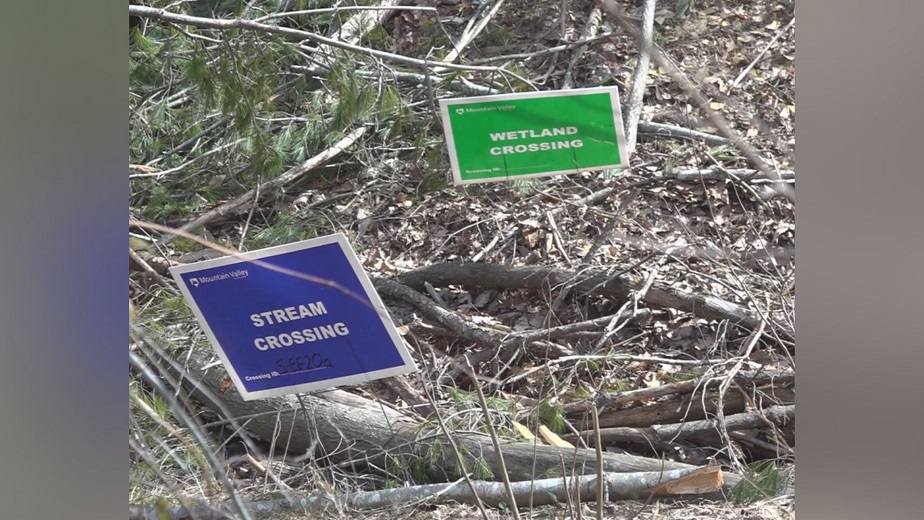 Roanoke, Virginia – Problems with erosion and sediment controls along the Mountain Valley Pipeline project continue to be documented by people who oppose the project.

They also want state regulators to use new oversight authority approved by the General Assembly.

Opponents showed footage from Yellow Finch Lane in Montgomery County, where they claim sediment was reaching nearby streams, during a press conference this week in Roanoke.

“Whatever they’ve done with the erosion sediment controls is not enough,” said Freeda Cathcart. “It’s not working. And we have new laws in place to give our government the power to protect our water and endangered species, and we need them to use it.”

The Virginia Department of Environmental Quality, according to Cathcart, should issue a stop-work order.

“It is disappointing, but not surprising, to see fossil fuel opposition groups utilize this type of public forum to mischaracterize erosion and sediment control measures on the MVP right-of-way. At the latest State Water Control Board meeting, VADEQ staff acknowledged receiving complaints about erosion and sedimentation on the right-of-way and, after investigating, reported no compliance issues in that reporting period.”

“Opponents of natural gas infrastructure have routinely used news conferences, letters to state and federal agencies, and social media events to push inaccurate information based on flawed methodologies and assumptions, justifying their opposition and supporting their policy agenda. We are committed to building this important project safely and responsibly, and we hope all parties will operate in good faith when discussing the complexities of construction processes and as we strive to achieve our shared goal of protecting the environment.”

“The MVP team appreciates the expertise and oversight of state agencies as we continue to ensure our environmental protection measures are held to the highest standards of compliance.”