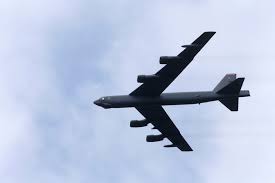 MOSCOW — The Russian military on Friday accused the U.S. and its allies of provoking tensions in the Black Sea region with a sharp increase in the number of bomber patrols and intelligence flights.

Col.-Gen. Sergei Rudskoi, head of the Russian General Staff’s main operational department, charged that the U.S. and other members of NATO have significantly increased the scope of their military activities in the region.

“The U.S. and its NATO allies will carry the full responsibility for a possible escalation of the situation in the region,” he said at a briefing.

Rudskoi pointed at a series of flights by the U.S. B-52 strategic bombers in August and September over the Black and the Azov Seas, alleging the missions were intended to simulate missile strikes at facilities in southern Russia. He said the bombers flew as close as 11 kilometers (less than 7 miles) to the Russian border.

After flying three B-1 heavy bombers over the East Siberian Sea last week, the U.S. military said the ongoing exercises were meant to show the Air Force’s “ability to continually execute flying missions and sustain readiness in support of our Allies and partners.”

The Russian general noted that the U.S. and its NATO allies also have intensified their intelligence flights near Crimea, which he said increased by 40% compared to the last year. He added that on one occasion on Sept. 4 five NATO reconnaissance aircraft were buzzing the area near Crimea at the same time.

Russia scrambled its fighter jets to intercept and escort the U.S. and NATO bombers and reconnaissance planes on 27 occasions this month alone, Rudskoi said.

He added that NATO warships were also spending longer stints in the Black Sea this year.

Russia-West ties have sunk to their post-Cold War lows after Russia’s 2014 annexation of Ukraine’s Crimean Peninsula.

Russia has bristled at the deployment of NATO forces in the Baltics and charged that the alliance maneuvers near its borders posed a security threat. The alliance and Moscow also have increasingly often traded accusations over military flights.

Rudskoi charged that Russia has proposed to NATO to reduce military activities alongside the border and discuss additional measures to help prevent military incidents, but the alliance has stonewalled the proposals.

Police in Ukraine investigate death of US Embassy employee