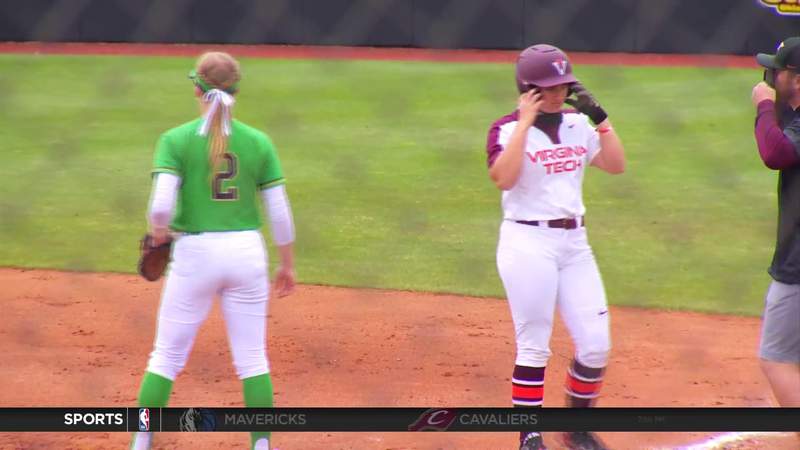 LOUISVILLE, K.Y. – Virginia Tech softball is on to the semifinals at the ACC Tournament following a 4-1 win over Notre Dame in Thursday’s quarterfinal.

The Hokies (33-12, 23-11 ACC) got a complete game from the ACC Pitcher of the Year Keely Rochard (25-7) who got the win after allowing just four hits and no earned runs to the Irish (31-13, 20-10 ACC). The junior struck out seven batters, including a swinging strikeout to get out of a bases-loaded jam without allowing a run in the fifth inning.

At the plate, Tech got four RBI hits Wednesday, including triples from freshmen Cameron Fagan and Emma Ritter playing in their first collegiate postseason game. Alexa Milius had an RBI single and Darby Trull added an RBI double. Milius, playing in her first ACC Tournament, was the lone Hokie to register multiple hits versus the Irish.

On her approach in the circle versus Notre Dame

“This time I was able to mix a lot more just because I knew I would only see [Notre Dame] for one game. I was able to use all my pitches this time.”

On how the team is playing now

“We’re making good adjustments, we still have a lot that we can get better at but that’s the good thing. We haven’t really peaked, we’re on our way there.”

The Hokies wasted no time putting runs on the board as Fagan, the No. 2 hitter, blasted a triple into right field scoring leadoff batter Kelsey Brown in the bottom of the first. Next batter, Milius, singled through the right side to bring Fagan home from third.

After freshman Addy Greene led off the bottom of the second inning with a walk and a stolen base, Trull drove a double into deep center field to bring Greene home for the Hokies’ third run of the ballgame.

After Notre Dame made it a 3-1 game in the top of the fourth, the Hokies answered right back with a leadoff single from Greene and a triple to right by Ritter to claim the three-run lead right back.

The Irish had their best chance to level the game or take the lead in the top of the fifth after they loaded the bases, but Rochard was able to end the inning with her fifth strikeout of the game. The right-hander retired the last five batter she faced to earn her 25th win of the season.

Milius was the only Hokie with multiple hits Thursday. The sophomore is now second on the team with a .316 batting average.

Brown swiped another base Thursday, bringing her season total up to 30 steals on the season and she has yet to be thrown out on the basepaths.

Milius, Fagan and Ritter all had RBIs in their first ACC Tournament game.

Rochard did not allow an earned run for the 16th time this season.

The Hokies are right back at it in Louisville Friday and will take on ACC regular-season champion Clemson at 1 p.m. on ACC Network.