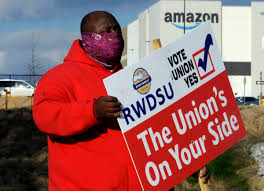 The Timesland News Guild, representing journalists and staff at The Roanoke Times and Laker Weekly, is seeking certification through a union election overseen by the National Labor Relations Board.

The NLRB began mailing ballots on April 10 to more than 50 staff members who qualify for guild membership. Ballots must arrive at the NLRB’s Winston-Salem, North Carolina, office by April 24 and will be counted on April 27. The election will be monitored by representatives from Roanoke Times parent company Lee Enterprises and the guild via video conference.

Members of the Timesland News Guild said they are “prepared to win this election by an overwhelming majority of votes.” The guild was formed on March 17 after more than 80 percent of eligible employees signed union authorization cards saying they “want a seat at the table” where decisions that affect readers and Times staff are made.

Last month the NLRB suspended union certification elections because of COVID-19 concerns. Despite broad newsroom and community support and repeated pleas from subscribers, former employees and guild members, Iowa-based Lee Enterprises refused to voluntarily recognize Timesland News Guild. Voluntary recognition would have allowed the Timesland News Guild to begin bargaining with the company over working conditions, including over recent furloughs.

The NLRB recommenced elections on April 6, but not before Lee announced mandatory newsroom furloughs in the midst of the COVID-19 pandemic. All employees, including reporters, photographers, designers, digital editors and support staff will be out of work for two weeks over the next three months which, according to the Timesland News Guild will, “cripple their personal finances and the Times’ ability to provide life-saving information to the communities it serves.”

Because the Timesland News Guild had not yet been certified by an election, it had no power to negotiate the terms of the furloughs, as other unionized Lee papers were entitled to do. If the election goes as anticipated on April 27, the guild will then be given the power to negotiate for the interests of Times readers and employees.

“It’s truly a shame that rather than voluntarily recognize the guild, Lee Enterprises has forced its newsroom to conduct an election in the middle of a worldwide pandemic that has already killed at least 75 Virginians and sickened more than 3,600,” said Tonia Moxley, a 20-year veteran Times reporter. “But I am confident we will win an overwhelming majority, and this will empower us to be a strong voice for readers whose access to life-saving information has been crippled by Lee-mandated newsroom furloughs, and for our coworkers, whose financial stability has been compromised during this crisis.”

“After six years of proudly working for this newspaper, I will be voting this week in favor of bringing the NewsGuild to The Roanoke Times,” politics reporter Amy Friedenberger said. “A painful emotional journey led me to this decision. My faith in management eroded over the years, and I’m not optimistic improvement will happen without a union. I believe that organizing is the best way to deal with our ownership.”

“Employee empowerment is our last, best hope for strengthening local news,” said Jeff Sturgeon, a 25-year veteran of The Roanoke Times. “Management has had total control forever, and now we’re at least going to be part of the conversation on how to run this paper.”

The Timesland News Guild derives its name from a term coined by The Roanoke Times sports department in the 1950s to describe the areas across Southwest Virginia that received coverage.

Timesland News Guild is a unit of the Washington-Baltimore News Guild Local 32035 of The NewsGuild, a sector of the Communications Workers of America (CWA).