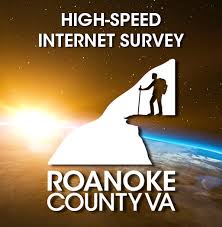 ROANOKE COUNTY, Va. – Roanoke County continues to see growth in both business and residents, but in some of the more rural areas, where growth is a possibility, no access to broadband is a non-starter.

The county recognizes this problem and is working to change it. Right now, it’s surveying residents to try to get a better idea of just who has broadband and who does not, as prior data from the census has become unreliable. The areas of focus are north of Interstate 81 and south of the Blue Ridge Parkway.

Earlier this summer, 10 News introduced you to Debby Layman and her low-speed way of life in the Catawba District. She and her husband live just over the mountain in Northern Roanoke County, but sometimes they feel a world away.

“When we moved out here, we didn’t need it, and now we do. It’s just like electricity, you know, we need electricity, now we need broadband.,” Layman said.

They live just 12 miles from downtown Roanoke as the crow flies, but much of their area still lacks consistent broadband access.

Roanoke County IT Director Bill Hunter recognizes the problem with a county wanting to be a regional leader lacking full connectivity. His team wants to shrink the gap between the broadband haves and have not’s.

“We literally have some residents in the county that can see where the internet ends, and the expense to get it from there to their home is just tremendous,” Hunter said.

The goal is to win state grants to offset some of that expense. Hunter’s desk is stacked full of survey responses. They sent out tens of thousands of them to learn exactly who is and isn’t connected.

Right now, they think they’re pushing 90% of households connected, but that number may be too high.

“It’s an unrealistic number, and I think that this survey is going to show that the county is much lower in percentage of connectivity than we currently advertise we are,” Hunter said.

They’ve received about a thousand responses and the survey ends at the end of the month. They hope to receive as many as possible because good data leads to the best plan and the best chance of being awarded a grant.

“The most attractive county with a bad plan is not going to be a grant recipient,” Hunter said.

Layman filled her survey out and has her fingers crossed. She hopes to be able to celebrate broadband at her house sometime soon.

County leaders are asking anyone who received a survey to please turn it in, even if you already have steady broadband access, as it helps paint a more accurate picture.