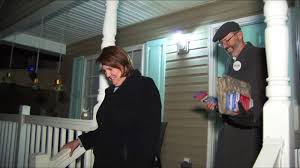 Roanoke, Virginia – The polls open when the sun comes up Tuesday morning and candidates all over our area made their final push to get out the vote Monday night.

Early numbers show what could lead to record-breaking turnout, but the candidates said that’s not enough to fall back on.

Monday night was dark and chilly as the clocks rolled back and a burst of winter moved in, but candidates for Roanoke mayor and city council made their final push. On election eve, Republican candidates for council, Peg McGuire and Maynard Keller knocked on doors in southwest Roanoke hoping to get Republicans on council for the first time in a while.

“We’ve been talking to our voters, to those solid Republican base here in Roanoke since June, we’ve been canvassing since June, and we’ve already knocked on 15,000 doors and made that many voter contacts so this is just the cherry on top of the sundae,” McGuire said.

Democrat Sherman Lea, the incumbent mayor, spent election eve making calls to Roanoke citizens asking for their vote. His team, spearheaded by his son, has been working independently, for the most part, due to the pandemic.

“I’m just very pleased with the commitment that I’ve gotten from the team and we’re finding some success, but I’m one to never get overconfident, you’ve got to keep working and not get caught up in watching the scoreboard,” Lea said.

The independent and write-in candidates are still pushing, too.

Mayoral candidate David Bowers did most of his work in the afternoon, but like other candidates, will make his final push at the polls Tuesday.

“I’m going to be up early, and I’ve got to put signs out at a couple of the polls, I always like visiting with people in Roanoke, they know me, they kid with me, they let me know what on their mind and I share with them my thoughts,” Bowers said.

Over 3,000 customers in Roanoke, Lynchburg without power