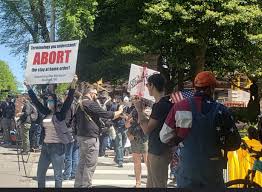 Horns blared and flags waved from vehicle windows as hundreds of Virginians converged Wednesday on Capitol Square to protest restrictions implemented by Gov. Ralph Northam during the COVID-19 pandemic.

Protesters reiterated the message of similar demonstrations taking place in state capitals across the country. The groups hope to influence governors and lawmakers to allow businesses and churches to reopen while they continue to adhere strict social distancing guidelines.

“At first we were compliant,” said protester David Decker. “Now it seems like it’s being forced upon us more and more, and we’re absolutely sick of it.”

Many protesters said they disagree that liquor stores are considered an essential business, while many smaller businesses were ordered to close.

“I am against any policy that gives liberty to a corporation over the citizens,” said Jeffery Torres. “Corporations get their interests served while the interests of citizens get ignored.”

A small group of protesters gathered near the Capitol Square entrance. Few wore masks or observed the Centers for Disease Control and Prevention’s suggested social distancing recommendation of 6 feet of space during the protest.

The stay at home order was later extended until June 10. Restaurants closed dining rooms and shifted to carry-out and delivery only. Recreational and entertainment facilities were shuttered, along with beauty salons, spas, massage parlors and other nonessential establishments. Essential businesses such as grocery and convenience stores, pharmacies, pet and feed stores, electronic and hardware retailers and banks can remain open.

The Virginia Department of Health reports approximately 10,000 confirmed coronavirus cases in the commonwealth as of Wednesday – the vast majority of which are found in Northern VA, Richmond and Tidewater. Northam and health officials maintain that social distancing is keeping cases from skyrocketing while others question the logic of treating the whole state based on conditions in exceedingly small geographic areas.

Unemployment claims have had a dizzying ascent, with the Virginia Employment Commission reporting on April 16 that 410,762 claims were filed since March 21.

The event was not without counter protesters, among them Dr. Erich Bruhn, a surgeon from Winchester. Bruhn wore a facemask and carried a sign that read, “You have no right to put us all at risk, go home.”

“I came out here today to tell the other side that the majority of people do not agree with this,” Bruhn said. “We want the economy to open up, but it is just too soon according to most scientists.”

As the interview with Bruhn was wrapping up, a female protester leaned out of her car window and shouted at Bruhn, “How long are we supposed to stay inside?”

Sen. Amanda Chase, R-Chesterfield, who has announced her intent to run for governor next year, voiced support for the rally.

“There will be a number of people at this rally, and it has been well publicized,” Chase said during a Facebook livestream. “I think it sends a great message to the governor to reopen Virginia in a smart, wise way.”

Protesters drove around the Capitol perimeter honking their horns for three hours. The event coincided with the General Assembly reconvening to respond to Northam’s vetoes and amendments.

The House of Delegates, which met under a tent on Capitol grounds, was bombarded by the ongoing ruckus. There were no incidents of violence reported, though one Capitol police officer joked he had a headache from all the noise.