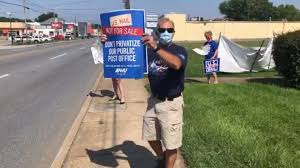 Roanoke, Virginia – Postal workers are rallying near the Post Office on Williamson Road in Roanoke this morning.

The small group of workers are carrying signs that say, “Don’t privatize our public post office.” The group is protesting against changes proposed for the U.S. Postal Service.

The United States Postal Service has been a hot topic of discussion for both political parties.

On Tuesday, postal workers, retirees, and supporters got together on Williamson Road to take a stand.

Protesters held signs, chanting “The post office is not for sale! We’re a service, not a business!”

Union officials say that multiple workers in Roanoke and Hollins have tested positive for the coronavirus.

Now, they feel their ability to do their jobs is also being threatened by politics.

They’re asking everyone to reach out to their congressional representatives to save the postal service by joining their push for funding. $25 billion dollars should cover it, they said.

Chris Sowers President of the Roanoke Local 482 A.P.W. chapter explained, “We’ve incurred additional costs during this time, but we’ve not been given the stimulus like every other agency.”

Sowers has been a postal worker for 35 years, he said the removal of three mail sorting machines from the Roanoke main office on Williamson Road will slow workers down substantially. “That’s going to create havoc for the public, because it’s going to be a domino effect,” he stated.

One person arrested after Sunday night stabbing on Elm Avenue