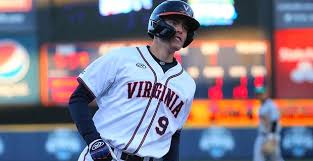 Virginia has landed a Collegiate Baseball Freshman All-American in each of the last three seasons and the multiple selections mark the first time since 2015 when Adam Haseley and Pavin Smith were honored by CBN. Under head coach Brian O’Connor, a total of 22 different players have been bestowed Freshman All-American honors from various publications.

The 2020 Collegiate Baseball Newspaper Freshman All-America teams reflect all games played before the season was stopped in mid-March because of the coronavirus pandemic.

Cotier started and batted second in all 18 games for the Cavaliers. He batted .338 with three doubles, four triples a home run and 15 RBI. His four triples were tied for the most in the nation and were the most in the ACC. On March 10 against UMass Lowell, Cotier tied a school record by scoring five times, one of 11 players in UVA history cross the plate five times in a game. He totaled 21 runs scored, second on the team behind Zack Gelof and third most amongst his ACC cohorts.

Racing coming back the Commonwealth of Virginia