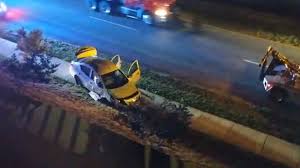 Roanoke, Virginia – Brejay Taylor, 20 of Lynchburg, was arrested Friday night by police after leading police on a chase that started in Botetourt County and ended in Roanoke.

According to the Botetourt County Sheriff’s Office, a deputy initiated a stop for speeding in the 3100 block of Blue Ridge Blvd. when the suspect began to flee. Along the route, the suspect’s vehicle hit two other vehicles. No injuries were reported.

Once in Roanoke, a tire of the car deflated and sent it over the curb in front of the District Vue Apartments at 2550 Orange Ave. NE.

Three people were in the car at the time, including one minor.

Taylor was charged with eluding police, speeding, reckless driving and contributing to the delinquency of a minor.

He is being held at the Botetourt County Jail on a $2,000 secured bond.