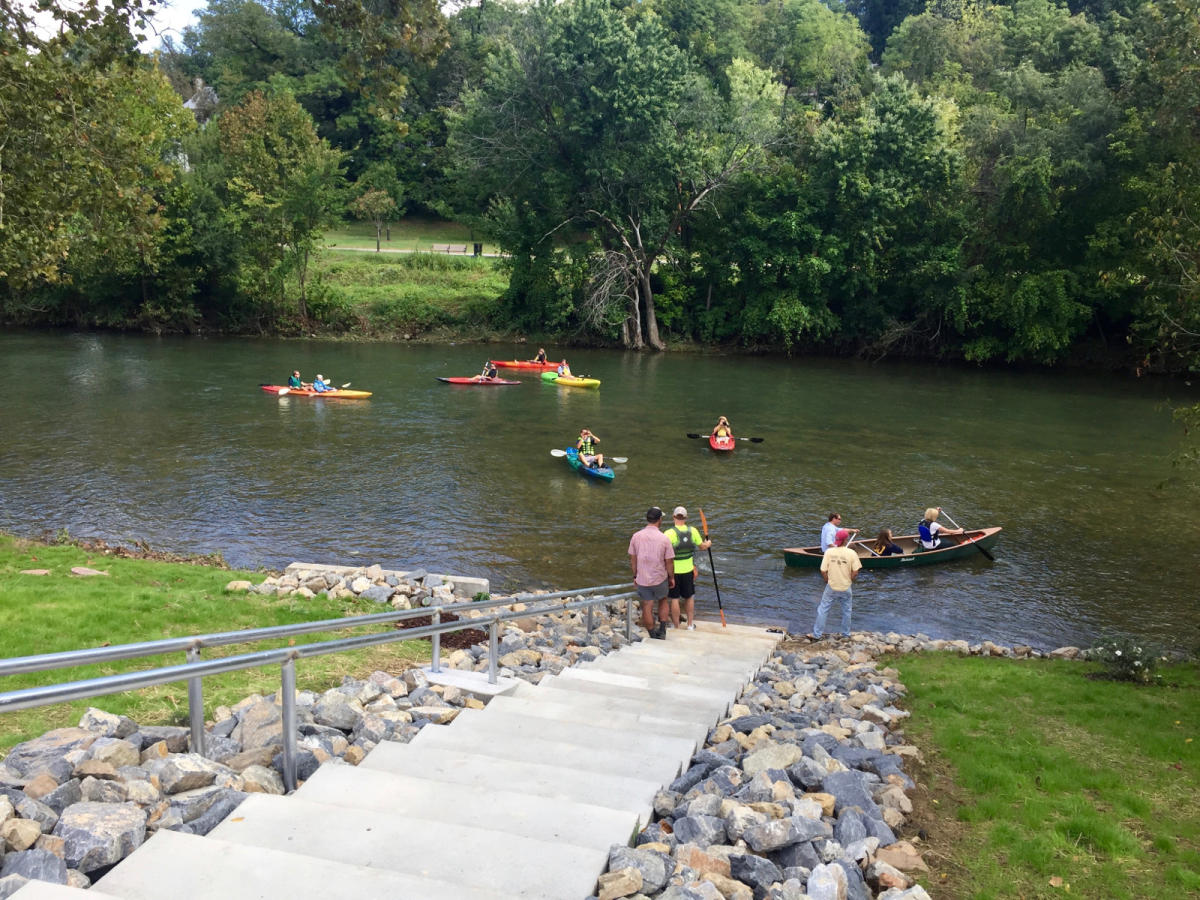 Paddling the Roanoke River downtown is now easier with the opening of a new kayak and canoe launch site made possible by a crowdfunding campaign that raised $80,000.

Community and corporate leaders today cut the ribbon at a site that is a joint effort between the Roanoke Outside Foundation, The Bridges development, Carilion Clinic and the City of Roanoke. The launch will be managed by Roanoke City Parks and Recreation and the city’s storm water division.

“This project, funded by private donations – no tax dollars – demonstrates our community’s support of investment in infrastructure that enhances our outdoor assets,” said Pete Eshelman, director of outdoor branding for the Roanoke Regional Partnership and Roanoke Outside Foundation.

There is no cost to use the launch, located halfway between Wasena Park and Piedmont Park, making it easier to canoe, kayak, or tube close to the region’s urban core along the Roanoke River Blueway, a water trail that runs from the South Fork of the Roanoke River at East Montgomery County Park to Hardy Road in Bedford County. Amenities onsite include a viewing platform, steps down to the river, boat storage rack and informational kiosk that includes a map of the river.

The Roanoke River Blueway has been named one of the Virginia Treasures, an initiative by Gov. Terry McAuliffe designed “to preserve, protect and highlight Virginia’s most important ecological, cultural, scenic and recreational assets as well as its special lands.” The program’s goal is to designate 1,000 treasures across the Commonwealth. The Roanoke River Blueway Committee is managed by the Roanoke Valley-Alleghany Regional Commission and works with member localities to promote recreational use of the Roanoke River.

The first takeout location point downstream is the 13th Street Bridge. The Tinker Creek access point in Vinton is the next developed access point.

“Carilion Clinic is proud to be a partner with our friends and neighbors at the Roanoke Outside Foundation, The Bridges, the City of Roanoke and the many other community members who made this possible,” said Nancy Howell Agee, president and CEO of Carilion Clinic. “Every time we engage in projects like this launch, it brings our community together even more. I can’t wait to see runners, walkers, bikers–and now kayakers and canoers–coming together where our Greenway and our Blueway meet, right in front of Carilion Roanoke Memorial Hospital.”

“The UBS Roanoke office recognizes the value of providing a quality of life focused on our region’s natural resources,” added William Hardin of UBS. “We are very proud to partner with the Roanoke Outside Foundation, Carilion, the City of Roanoke and The Bridges to bring about a resource like this to provide easier access for outdoor enthusiasts who enjoy paddling the Roanoke River.”

“Adding a kayak launch is consistent with our vision to create a destination to live, work, and play,” said Aaron Ewert, project manager for The Bridges, a development that includes South 16 apartments, Dr Pepper Park, Starbuck’s and Moe’s Southwest Grill. “A kayak launch in the middle of the urban core is not just a great amenity to support our growing outdoor culture – it’s something people and businesses are seeking when choosing where to live and invest.”