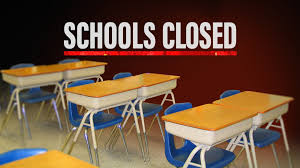 ROANOKE, Va. – All schools in Virginia will remain closed until end of the academic year.

Gov. Ralph Northam made the announcement on Monday afternoon during his address.

“I know that the next several weeks, the next several months, will be difficult. They will require everyone to change the way that we live, the way we interact with each other,” the governor said.

Virginia schools superintendent James Lane said the state would be presenting local school districts with different options to handle the early school closures, which included extending the academic calendar during the school year.

Northam acknowledged that the extended school closure would have serious impacts on families of young children, and he called for “an urgent public-private response” to make sure essential workers have access to childcare. The Department of Social Services and Department of Education would be issuing guidance to communities later Monday, he said.