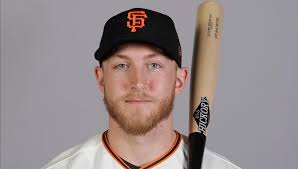 CHARLOTTESVILLE, Va. – Former Virginia baseball standout Joe McCarthy (Scranton, Pa.) made his Major League debut on Thursday night (July 23) with the San Francisco Giants. He was one of seven Cavaliers named to opening day rosters and one of 18 (most in ACC) included on 60-man rosters for the 2020 season.

McCarthy became the 45th Cavalier to appear in a Major League Baseball game and the 22nd under head coach Brian O’Connor. Virginia had five players make MLB debuts last season, tied for the most of any college baseball program in 2019. McCarthy is the fourth Cavalier (Adam Haseley, Josh Sborz & Matt Thaiss) from the 2015 National Championship team to make it to the show.

McCarthy batted sixth and played right field in his debut. He went hitless in four at bats as the Dodgers won 8-1.

A centerpiece on Virginia’s 2014 and 2015 College World Series teams, McCarthy spent three seasons with the Cavaliers from 2013-15. He was selected in the fifth round (148th overall) in the 2015 MLB Draft by the Tampa Bay Rays. McCarthy was traded to San Francisco at the 2019 MLB trade deadline and played 24 games with Triple-A Sacramento.

McCarthy hit the ground running as a first year at UVA in 2013, earning ACC Freshman of the Year honors to go along with Freshman All-American honors from Collegiate Baseball Newspaper and the NCBWA. The left-handed swinging outfielder was a two-time All-ACC performer, garnering second team honors as a freshman in 2013 and landing on the first team as a sophomore in 2014.

McCarthy shined in the postseason scoring the second most runs (22) and hits (27) in 32 career NCAA Tournament games. In 2013 he was named to the Charlottesville Regional All-Tournament Team. McCarthy scored the game-winning run in game two of the 2015 NCAA Super Regional against Maryland to send UVA to Omaha for the second-straight season.

Harbor Park to host Free Catch on the Field Event