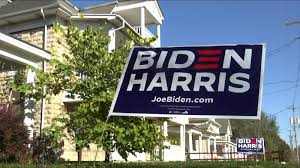 “I was following this all week, even in the midst of my own election,” said Lea, who was elected for a second term as Roanoke’s mayor this week. “Somehow it feels like a holiday. That’s how depressing it was under the leadership of Donald J. Trump.”

The feeling was echoed by fellow Democrat John Edwards, who represents Roanoke in the Virginia State Senate.

“It’s a great day for America,” Sen. Edwards said. “We finally have a president who has character, who cares about people, who is empathetic, and is going to communicate well with the American people.”

Roanoke teenagers Jasmine Rosser and Morgan Fletchall said this was the first election they have ever voted in.

“It was super exciting to be part of such a big election and to have a say-so on what the results were going to be,” said Rosser.

“They picked up seats in the U.S. House and it looks as if they’re going to keep the Senate, so all of those are bright spots for Republicans,” Hult said.

Lea said he is looking forward to how the next four years will be under President-elect Biden.

“We’re moving a person out of the White House who was divisive,” Lea said. “I would tell Biden, ‘This country needs you more than ever before. Stay the course.’”