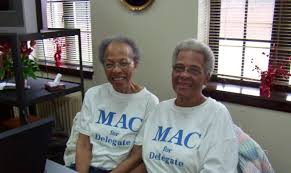 Evelyn Davis Bethel died Tuesday at age 87. She was greatly beloved by many in Roanoke, both young and old. She fought for equal rights and justice, becoming a role model for American children everywhere.

Bethel and her beloved sister Helen E. Davis, who died in August of last year, grew up in a modest home just up the street from the three-story brick house in the shadow of the hill of Saint Andrews Catholic Church that was their residence for the last three decades.

“We attended Lucy Addison,” Bethel said, referring to the school led by and named for the great African-American educator, Lucy Addison, who died in 1937. “We had teachers like Ms. Mary Hackley (a local educator for over four decades), a woman who really inspired us.”

“In those days, everything we needed was on this side of town,” said Davis, referring to the NW and NE areas of Roanoke located north of the railroad tracks that divide the northern and southern parts of the city.

The sisters stayed on their own side of town except for occasional shopping at Woolworth’s with their mother, mostly looking for ten cent items, since money was scarce.  “My mother was a cook and a housekeeper who reared seven children,” said Bethel in a 2016 interview. Every now and then the family attended a parade as it marched down South Jefferson Street.

“I don’t really remember discrimination at the lunch counters (prior to integration in the 1960s),” said Bethel, “because we were so poor, we couldn’t buy a soda. But I do recall sneaking a sip of water from the white water fountains; I did that because I wanted to see if ‘white’ water tasted any different.”

Davis explained that there were hotels, clubs and hospitals, as well as services like a shoe repair, cleaners, plumbers, dentists, banks, and much more in their Gainsboro neighborhood – before the federal urban renewal policy allowed city planners and transportation executives to claim vast amounts of African-American owned property in the name of eminent domain.

“There was a whole neighborhood on the other side of Williamson Road; it was a beautiful, black residential neighborhood with lovely, sprawling homes, but it was wiped out in the 1940s and ’50s,” said Bethel. “Mrs. Galloway and Mrs. Polk lived there.”

The homes in the area that were once located east of Williamson Road were owned by African-Americans who operated their own businesses. But when huge parcels of land in the community were demolished in NW and NE Roanoke, businesses that supported black affluence were buried there too. The Davis girls visited there for tea one day, but the next day there was a barricade, and then, everything they had known was simply gone.

Since the ’50s Gainsboro has been reduced to a fraction of its former self; the musically brilliant, booming and fashionable heart of the Roanoke Renaissance that was Henry Street has become a memory. The old Roanoke Tribune office on Henry was bulldozed while the paper’s publisher, Claudia Whitworth, was at lunch nursing her sick father.

“Even the black cemetery was uprooted when I-581 came through,” Bethel said. “People in Roanoke had been fairly soft-spoken about the destruction, but there was outrage about that.”

Bethel lamented the fact that the city tricked people and made promises that were not kept. “Before the clearing (for the Coke Company, the civic center, other commercial sites, and the roads) the city had promised that black people who lost their homes would be able to come back and they’d have a brand new house, but it never happened,” said Bethel.

Instead, many black citizens were relocated against their wills to homes without porches for neighborly gatherings; homes that they could not afford to heat. Fair compensation was never awarded to those who had been disenfranchised. Lost African-American owned businesses faced the same fate. Lawsuits filed with the U.S. Department of Justice were mysteriously dropped. State politicians turned a blind eye.

“After graduating from Virginia Union University with a major in sociology, I left in 1955 to marry John W. (Nick) Bethel and to pursue a career with the government in D.C., but I came back in the ’90s after my husband’s death to retire here,” said Bethel. “My plans were to go for leisurely walks and to learn to play the guitar.”

But when Bethel saw that the city and the Virginia Department of Transportation (VDOT) were planning to rip up her neighborhood again, she put down her guitar, picked up the phone and called a Civil Rights attorney.

“I looked at the map and realized that they were trying to bring a highway through here.” Bethel said with indignation still apparent in her voice; her hands forming a linear slash in the air. “I saw Jefferson, Wells, Gilmer, and Patton; the way they had it laid out, they would have just totally destroyed our neighborhood.”

That’s when, together, the sisters formed Historic Gainsboro Preservation District, Inc. (HGPD) in 1991. In 1995, after attending a slew of city council meetings, speaking out and protesting in front of the courthouse with signs, they were able to preserve historic designation for the Gainsboro Library. The city had plans to demolish the iconic edifice built in the early 1940s.

“Hundreds of local school children helped us by signing petitions to save the library,” Bethel said, beaming as though the sun had suddenly emerged from the clouds.

Davis, Bethel, HGPD, and other concerned citizens won historic designation for the Gainsboro section of Roanoke City in 1996; final paperwork was signed by the National Register of Historic Places in 2005.

The original town of Gainsborough (later called Gainsboro) was incorporated in 1835. The town of Big Lick, which later became Roanoke City, was not chartered until 1874. The city itself was not chartered as an independent city until 1884.

A few of the city fathers were insulting during Bethel’s very public and relentless pursuit of justice but according to the soft-spoken, yet outspoken activist, “I just let people say what they wanted and kept my eyes on the goal. I also tried to run for city council in 2010, but a bad fall and subsequent brain injury kept me out of the race.”

After the interstate (581) came through, Patton Avenue and Gilmer (NE) were saved. “Jefferson Street was the cut off,” said Davis.

These changes in the city’s plans were largely due to the sisters’ efforts.

“My dream is that there will once again be a vibrant residential community in this area,” said Bethel.

Editor’s note: Evelyn and Helen Bethel played no favorites when it came to protecting their neighborhood and speaking out on what they believed was right and best for all of Roanoke. Lifelong Democrats, they endorsed two Republicans in the Roanoke City Council race held in May 2006. Their names . . .?

Travel restrictions continue when traveling by air during vacation season