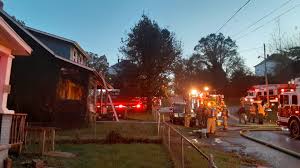 Roanoke, Virginia – Roanoke Daily Magazine was on the scene to learn more about the fire that happened in downtown Roanoke Sunday evening.

Roanoke Fire-EMS was able to put the fire out in less than five minutes and said the incident was “more smoke than flames.”

According to firefighters, the house was vacant and no utilities were on inside.

The battalion chief on the scene said it was likely caused by a squatter.

Authorities said there were no injuries.

According to authorities, units arrived to find smoke and flames coming from a residential structure.

Crews are currently working to extinguish the flames and the cause is unknown at this time.

Over 3,000 customers in Roanoke, Lynchburg without power