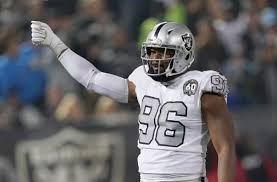 n recent weeks, we’ve seen a handful of Raiders make generous donations to assist struggling communities during the COVID-19 crisis, and former first-round pick Clelin Ferrell is the latest to make an impact.

Ferrell, who grew up in Richmond, Va., has generously donated $100,000 to the Eviction Diversion Program to help families struggling to make ends meet. In his hometown, evictions have been an ongoing problem, and quarantine and the economic downturn have heightened an already serious issue.

“Obviously, most people in the city can’t go to work, but … I’d say about four or five of my close friends from back home are really feeling this,” Ferrell said. “Not just the quarantine aspects, but needing help with funds, don’t know how they’re going to pay rent this month or buy groceries for their kids.”

Roughly two weeks ago, he came up with the idea of helping his city. He just needed to find out how he could make that happen.

“I got in contact with, through my sources, the Mayor of Richmond, [Lavar Stoney], and I was like, ‘I want to make a large charitable donation,’ but I wanted to know what was the most stricken areas that we needed to help out; whether that was in the medical field with supplies, getting people food or helping people out who may have lost their jobs,” Ferrell explained.

“He basically came to me with two organizations that [are intended to help] ongoing problems in Richmond, but they were going to continue to get worse with the pandemic. So, they told me about the EDP (Eviction Diversion Program), because Richmond historically the last few years has had the second-highest eviction rate in the country, and people because of the economy has forced people to get evicted.”

According to evictionlab.org, Richmond had an 11.44 percent eviction rate in 2016, which ranked second in the country. While there aren’t currently any metrics projecting how much higher that number could rise during the pandemic, it’s not hard to imagine the looming ramifications.

Ferrell is determined to make a difference in his hometown because he feels forever indebted to the city and people who helped raised him. Fortunately, the 22-year-old is in unique position and feels like his donation is the least he can do.

“I feel like, for me specifically, like where I’m from is a part of who I am,” he said. “It’s a big part of who I am. I feel like I’m forever endowed to them because I could never repay the city of Richmond and the people who helped me become the person that I am. I wouldn’t have all these blessings that I have now if it weren’t for them and also I’m endowed to the kids that come after me. It’s just a blessing to be able to give back.”

Even when quarantine has ceased and life returns to normal, Richmond will still face an uphill battle. Ferrell’s goal is bigger than a one-time donation, he wants to continue spreading awareness about the problems in his hometown, and hopefully inspire others to lend a helping hand also.

“Richmond has a lot of athletes, so hopefully if I can campaign and get other athletes to join in, just get the word out as much as possible,” Ferrell shared. “I just want to spread as much awareness possible, so hopefully it brings more funds to it. These problems that we have in Richmond aren’t just current problems, they’ve been ongoing and they’re going to get a lot worse.”